L’Església de Crist in Sabadell, part of the Reformed Episcopal Church in Spain, or IERE (Iglesia Española Reformada Episcopal), celebrated 115 years of history on 12th October 2018 with a special service marking its creation in 1903.

This church, led by Revd Guillermo Wilches, had its origins in the churches of Monistrol de Montserrat and Terrassa. The link that brought those two churches together was the Estruch family. Joaquim Estruch, in Montserrat, and his son Antonio Estruch, in Sabadell, were driving forces of Anglicanism in Catalonia.

Members of the congregation and guests from other churches attended the special service on 12th October (pictured above).

Also taking an active part in the service were Revd Deborah Chapman, licensed to serve in this church, and her husband, Revd John Chapman, chaplain of St George’s in Barcelona (both are pictured in the right-hand side of the photo below). 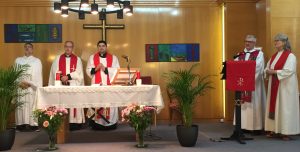 Info on attending services in person