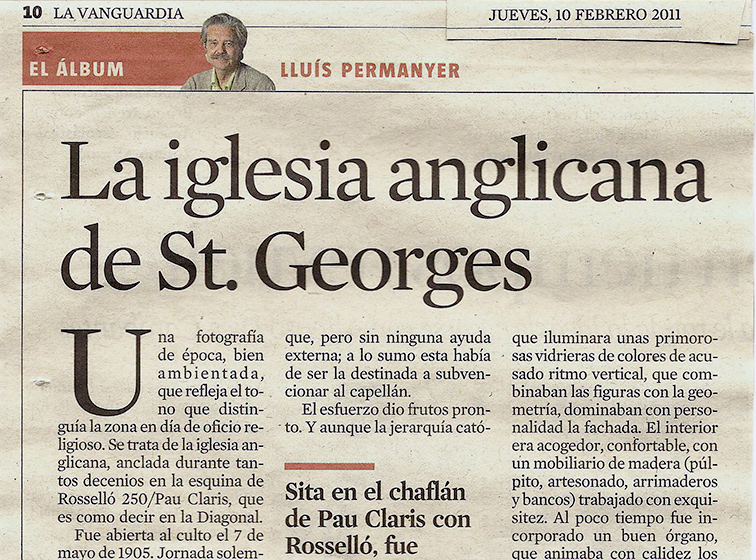 Lluís Permanyer, the well-known journalist and chronicler of Barcelona history, has written an article in La Vanguardia about the old St George’s church building, which used to be located in L’Eixample at the corner of Rosselló and Pau Claris before it moved up the hill to its present location at C. Horaci 38 in Bonanova/Sant Gervasi.

The first church service held on 7 May 1905 was “a happy day for the Anglican community of the city,” writes Permanyer. An archive photo shows people queuing up in their Sunday best to enter the church.

Permanyer recalls various obstacles the church had to overcome along the way, from initial opposition from the Catholic hierarchy, to the Spanish Civil War, during which time the church doors remained closed but the building didn’t suffer any damage. Eventually the church decided to sell the plot and relocate to a new building more suited to its changing needs.

Original elements, such as the carved wooden pews and pulpit that adorned the original church, were salvaged and remain in use today.

The article ends by saying that “the corner was lost: the church was demolished, and in its place was put a building of dispirited mediocrity.”

A sad ending for Barcelona’s architectural heritage, perhaps, but thankfully for St George’s, the story doesn’t end there. After all, a church is much more than a building, but a living, breathing, Spirit-led community inspired by a God who lives and reigns today.

It’s great to read about St George’s glorious past. But it’s even better to experience its dynamic present, and to join in the work of building God’s future Kingdom.

View a copy of the La Vanguardia article in Spanish.

Next GAiN campaign for Ukraine